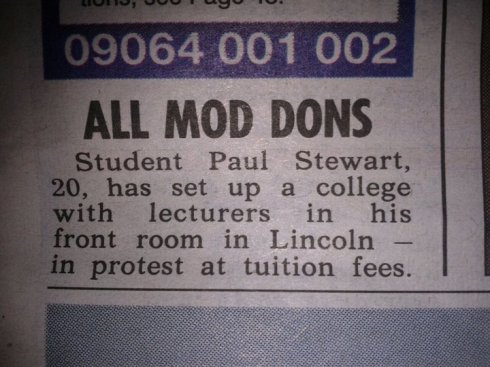 The rationale behind the idea of the Alternative Art College (AAC) is to show that you can gain the same if not a better understanding of a topic than you could if you were to pay £9,000 to study at an education institution. The AAC are against anything that appears to support wage slavery, what is meant by this is any system that has not got a scheme that supports equal wage to equal input.

Our aims are to develop an intellectual capacity on a subject through seminars, events and workshops that support the passion and interest of the student.

AAC stand for much more than just an alternative way of learning but also a protest against the government’s consumer based style on knowledge. Why do they feel the need to make it something that is only financially accessible, knowledge should be priceless.  Know when it comes to employability it’s about taking those assets that have been gained in the events  set up to then further develop the individuals knowledge of that area.

One thought on “In the World”