SFSIA Berlin
July 4-29, 2016
Art and the Politics of Individuation:
Affect and the Multiple Body in Cognitive Capitalism

Art and the Politics of Individuation, this year’s Saas Fee Summer Institute of Art, engages the far edge of contemporary artistic and theoretical discourse through the perspective of Cognitive Capitalism. The mutation of labor generated by the information age has led to new sites of production in the mind and brain. This course asks us to consider what may be the ramifications for art practitioners and theorists. 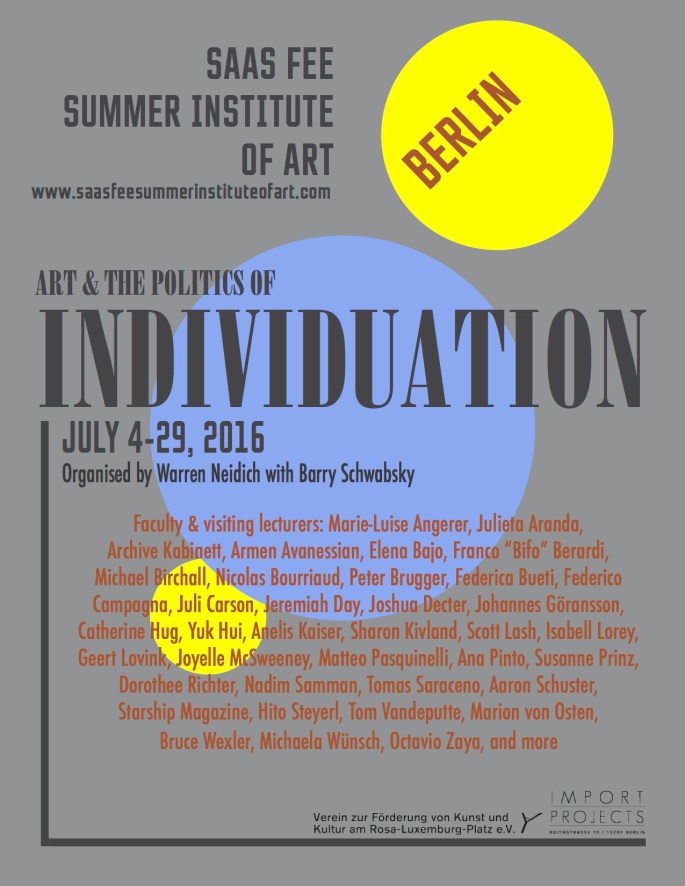 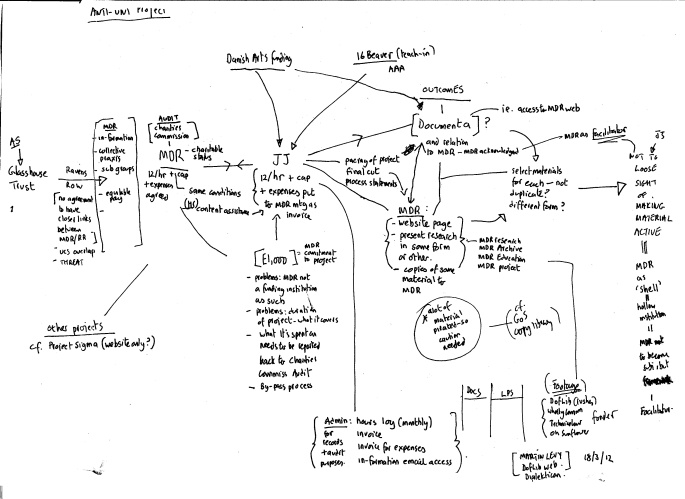 What is Open School East?

“OSE is a non-fee paying art school for 13 associate artists and a communal space re-opening a former library in De Beauvoir Town, East London. Emphasizing cooperation and experimentation, the initiative is set up to facilitate the sharing of knowledge and skills between artists, local residents and neighbourhood organisations.”

It is important to point out that the former library space, the Open School East occupies, is commissioned and funded by the Barbican and Create London. The project is also supported by the Legacy Trust UK and the London Borough of Hackney.  Take that as you will.

The event was chaired by Anna Colin a co-founder of the space. In regards to the OSE she stated, “it is a re-opening of public space to learn and exchange in the former library.” This free, art, ‘learning environment’ is focused around improvisation, collection, self-direction in a context un-burdened from the academic practice of accreditation and awards.

The production of OSE was highlighted in reference to the Arts and Social context  programme run at the Dartington College of Arts (1978 – 85).The example Anna Colin used was of students doing work experience, in contexts like a fish and chip shop, where art is not apparent, to discuss limits of participation and collective working. The innovative idea of the course was to produce a generalist artist-designer, capable of responding to the unpredictable creative challenges that arise in a community setting.

Elena Crippa the first of the four panelists focused on historical accounts of the changes in art and arts relation to education. She defined 3 key terms that exist historically; ‘experiment’, ‘radical’ and ‘discursive’. She highlighted a  shift from experimenting specifically with visual arts to questioning of society and existence.  Moving on to radical pedagogies, Elena discussed Paulo Feriere and questioned how, the artist in a community project or education workshop, has to be wary of becoming “the colonizer”. The purpose of this was to define the ‘radical’ and ‘experimental’, as two ways of doing, two distinct  possibilities, that should not be confused.

Alistair Hudson (deputy director, Grizedale Arts), the second panelist, highlighted the life span and production of the Grizedale Arts Centre. The space is seen by for many as a resource, which is for and of the community of Coniston, the Lake District. The building is the original site of John Ruskin’s institute, where Ruskin  used art as a tool to teach and learn with, rather than as a subject or discipline. Historical John Ruskin’s institute was  involved in many community based projects  such as building a road with students in Oxfordshire, one of who was Oscar Wilde, to prevent the spread of cholera.  Alistair defined the Grizedale Arts Centers relationship to   art, as  an ordinary  item in ordinary life, habitual, rather than  rarefied and or autonomous. Using the creative tools for use rather than mainstream market  values.

The Third panelist, Janna Graham (projects curator, Serpentine Gallery), discussed the development of the Centre for Possible Studies. Janna mentioned how the ‘banking’ concept is  processes of  ‘colonialism’ or the innkeeper to a neo-liberal ideology.

Ahmet Öğüt (artist and initiator of The Silent University) was the last panelist. Ahmet took us through the project Silent University, which can be seen as a ‘semi-autonomous’ space for migrants and asylum seekers to utilise  unrecognised voices to express  unacknowledged knowledge.. The school  allows a platform for individuals and collectives to share and exchange. The autonomous functionality of this space needs to parasitically be attached to an arts or cultural organisation to survive.  So it  also can be a tool for  those involved  to navigate their surroundings.

The first question here is, what are they defining as ‘public’ space and can ‘public’ space  become available if its commissioned for an associate group of artists to ‘engage’ with the local community. The placement of 13 artists in residence does spark the imagination and produce reality TV connotations, I’m an Artist get me out of here!’ On a serious note, if we were to see the artist as an agitator or a catalyst to  produce  conversations, our first issue is how ‘public’ will this space be and who’s ‘public’ is it defined by? How does a barbican/create commission relate to this environment, can it be relevant to the local community?

Each talk was interesting but only gave 4 accounts of separate interactions and did not allow time to have a discussion of how they related to  the OSE or others. The format was very didactic and if more time was available for discussion it would have been better. I think the AAC was very aware that the space was creating a radical curriculum but not quite a radical pedagogy.

It still boils down to similar issues of access and engagement and how we create structures that mirror capital or neo-liberal forms. The talk, format and structure epitomised the recouped format of the ‘alternative learning space’ it adheres the same format as any other institution but try’s to talk its way into being something else. 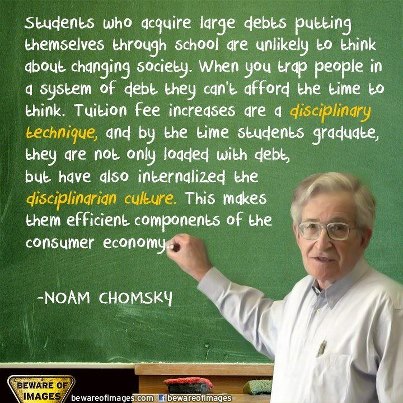 Most universities in England are going to have fewer places to offer students this year, as the funding changes in higher education are implemented.

The Higher Education Funding Council for England suggests that about three out of four universities could reduce places – some by more than 10%.